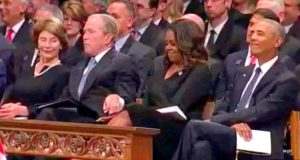 Again George Bush share Michelle Obama a Candy, Yes, again. As if once was not enough, he had to go and do it all over again. That too at the State funeral, of his father!

The second question that needs to be raised is, why would George W Bush want to be caught doing the same thing again? The answer to this is also easy – because he wanted the publicity. George W Bush knew he got publicity the first time he handed candy to Michelle Obama. So, he knew, if he did it a second time, he would get publicity again.

Now that is a tough cookie to break. But there are other questions looming large after his second pass of candy! The big question that people should now be asking is – was it all staged?

And Then He Goes And Does It Again!

“President Bush and I, we are forever seat mates because of protocol, that’s how we sit at all the official functions so he is my partner in crime at every major thing where all the formers gather. So we’re together all the time, and I love him to death. He’s a wonderful man. He’s a funny man. And it was a simple gesture. He was getting a cough drop from Laura, and I looked over, and I said, ‘hand me a cough drop.’ And he was like ‘oh, okay.’ And I will add that they were old cough drops. That’s the funny thing.”

Which would lead us to another question, why was Michelle Obama asking for cough drops from George W Bush, a second time? If she wanted cough drops so badly, knowing the kind of publicity that was got from this incident, the first time, why did she ask for cough drops a second time? There can be only one answer and that would be – George W Bush and/or Michelle Obama are seeking publicity. Why? Now that would be a question worth probing!