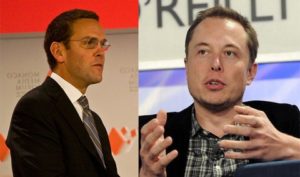 From Musk to Murdoch at Tesla? In a recent report by the Financial Times, it was stated that James Murdoch, the son of Rupert Murdoch, Fox mogul, would replace Elon Musk as the Chairman of Tesla. But Elon Musk, denied this report by Tweeting on Twitter, “This is incorrect.” Mr. Musk did not elaborate on the same.

After years and years of working with various media companies, last year James Murdoch joined Tesla’s board. But to-date, James Murdoch has never ever been the head of any company that manufactures electric vehicles or cars.

In spite of his Tweet, the word is that Elon Musk will have to step down from his position as the Chairman of Tesla, for a period of 3 years. This is the result of a settlement reached between Tesla and the SEC (Securities and Exchange Commission). This settlement was arrived at, as a result of the Securities and Exchange Commission filing a lawsuit against Elon Musk, in which they accused Mr. Musk of making “false and misleading statements”.

Earlier this year, it was reported that Elon Musk had planned to step down as the CEO of Tesla, because he planned to start his own digital currency company, known as ‘Bitcoin Profit.’ About this, it was said that it is “A new company that he thinks will change the world.” But spokesman for Tesla, Kamran Mumtaz, said that these reports were false.

These reports that Elon Musk was starting his own digital currency company, appeared on a website that looked very similar to the CNN Tech site. On this site, there were links that would direct people to video streaming sites or advertisements. CNN reported that the graphics and the stories on the site were all false and not of theirs. It was impossible to locate the creators of the website. In February, Elon Musk had posted on Twitter that he had not made any investments in cryptocurrency. He Tweeted, “I literally own zero cryptocurrency, apart from .25 BTC that a friend sent me many years ago.” Mr. Musk was stating this in response to a post as to why he was being impersonated by Twitter bots, to promote cryptocurrency.

On Saturday, Mr. Musk agreed to pay a fine of $20 million, to settle charges levied upon him by the Securities and Exchange Commission. As per the settlement, he will be allowed to remain as CEO of Tesla, but he will have to quit his role as the Chairman of the Board of Tesla. According to a document from the court, Mr. Musk accepted the deal of SEC, “Without admitting or denying the allegations of the complaint.” In a press release, the SEC said,

“The $20 million in penalties will be distributed to harmed investors under a court-approved process.”

A few days after the SEC passed judgment against him, Elon Musk mocked the SEC, saying  on Twitter, “The Shortseller Enrichment Commission is doing incredible work.”