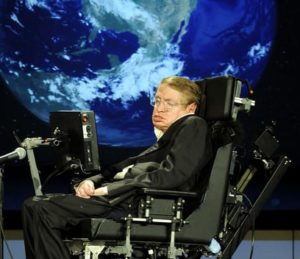 The last paper of Stephen Hawking? It is said that one of the greatest minds of our lifetime, is Stephen Hawking. So, when he died, anything and everything associated with him, probably became a 1000 times more famous than it already was – including the papers that he wrote on various theories. Now, the point is, there are many stories about him writing his last paper, titled ‘A Smooth Exit from Eternal Inflation?’ BUT…

Was It Really Hawking’s Last Paper?

In his entire life, Stephen Hawking has written a lot of stuff. ‘A Smooth Exit from Eternal Inflation?’ was co-authored by him with Thomas Hertog, presumably just before he passed away. And, it is believed that this paper was submitted to a journal, that is still unknown.

It is being said in various media, that this happens to be the ‘last known’ scientific writing of the famous man. The truth is that this paper, at the moment, exists in just what is known as a ‘pre-print form’. What this actually means is that this paper, has not gone through the complete process of ‘peer-review’

Yet So Much Coverage

In spite of the so called last paper of Stephen Hawking, only being in the ‘pre-print form’ stage, yet it has already received tremendous global coverage and is being touted as ‘Stephen Hawking’s last paper.’

When you have such a headline attached to such a famous person, it is bound to bring in readers by the millions, if not billions. And of course, that would spell ‘money being made’, by the people who are ‘eagerly pushing’ this ‘last paper’ of Stephen Hawking.

Leaving Behind A Rich Legacy

At the age of 76, Stephen Hawking died, on March 14th, 2018. Stephen Hawking became famous for his works on general relativity, the topic of singularities, black holes and that famous radiation type named after him – Hawking radiation.

But his final legacy, it is being said, lies in the form of a scientific paper, ‘A Smooth Exit from Eternal Inflation?’ It is believed that he completed this paper, just days before he died.

The Name Of This ‘Last Paper’?

Some media are labeling it as ‘A Smooth Exit from Eternal Inflation?’ Others call it
‘Black Hole Entropy and Soft Hair’. But what did Stephen Hawking name it? Will we ever know the truth?

Some media say that Stephen Hawking co-authored this paper with Thomas Hertog. There are other media that report that he co-authored this ‘last paper’ with Cambridge University professor, Malcolm Perry. It is believed that just a few days before the death of Stephen Hawking, Malcolm Perry was seen very busy working on this paper with his colleagues at

Harvard. On this, Malcolm Perry was reported to have said, “It was very difficult for Stephen to communicate and I was put on a loudspeaker to explain where we had got to. When I explained it, he simply produced an enormous smile. I told him we’d go somewhere. He knew the final result.”

Looks like bad games being played by the media doesn’t it? Well in the words of the great man himself, “However bad life may seem, there is always something you can do, and succeed at. While there’s life, there is hope.” He told Hong Kong University of Science and Technology in 2006.