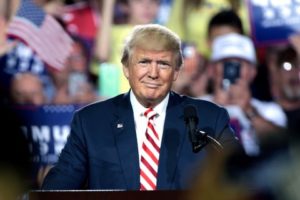 Trump neutralizes NAFTA trade talks again. The reason? The Guardian was quoted on Twitter as saying, “Trade talks stuck in neutral as Trump ‘very unhappy’ with Canadian negotiator.”  The US President is not at all happy with the negotiator from Canada. Once again US President Donald Trump threw grave shadows on the future of free trade talks between Canada and the USA, despite a deadline of September 30th, 2018, being set by USA, to rewrite the NAFTA deal! Recently, a new deal was struck between the United States of America with Mexico, with regards to NAFTA (North American Free Trade Agreement). But Canada was left out of this deal.

Why Did The Talks Fail?

Attribute it to none other than President Donald Trump. In the words of the President of the United States of America, as told to reporters, “We’re very unhappy with the negotiations and the negotiating style of Canada – we don’t like their representative very much.” Apparently President Trump was referring to Chrystia Freeland, the Foreign Minister of Canada. Sometime earlier this year, Chrystia Freeland had Tweeted her support for Saudi human rights activists who had been jailed. This had caused a huge uproar in the diplomatic community.

Another reason why the talks failed, according to President Trump at least, was because, in the words of Mr. Trump, “because [Trudeau’s] tariffs are too high and he doesn’t seem to want to move – and I told him: ‘Forget about it.”

Is There Any Truth In What President Trump Says?

Justin Trudeau, the Prime Minister of Canada has indicated very firmly that he was totally committed to the talks regarding NAFTA and he sees a breakthrough soon. In his words, “The Americans are finding that the negotiations are tough because Canadians are tough. But a good, fair deal is still very possible. We won’t sign a bad deal for Canadians.”

Negotiations between the US and Canada on the NAFTA deal, have now reached a deadlock. Previously, Canada was not willing to change its policies on the imports of milk and cheese, in support of its policies that were put in place to protect its own dairy farmers. On the other hand, President Trump insists that Canada buy dairy products from the US, at the expense of their own dairy industry.

Very recently, Canada was not willing to enter into any deal with the United States of America, unless it provided protection to Canada, from any punitive tariffs on autos and tariffs on steel. In the words of Bruce Heyman, former US ambassador to Canada, “The President was using tariffs as a tool to squeeze the Canadians. Canada is very close to getting a deal, but wants assurances from the United States that they’re not going to place tariffs on them going forward.”

President Trump is using tariffs as a tool to negotiate with Canada. Because of this, Canada is very worried that its auto sector, which happens to be an integral part to the economy of Canada, could be the next target of President Trump.

According to economists, the threat issued by President Trump that a tax of 25% would be levied on Canadian cars, would be a crushing blow for Canada. And it would badly hit Canada’s manufacturing sector and this could mean Canada would be hit by recession.

Trump was quoted as saying about Chrystia Freeland, the Foreign Minister of Canada, “Such a nasty woman.” Now just who is being nasty, you have to figure that out on your own!